Until recently, I could only speak generally about how the Twilight phenomena sucks. Vampires are so over-done and vampire-human love is repulsive. Not that its legion of girl fans even bat an eye when you remind them that it's all about necrophilia.

Last night, my girlfriend made me watch the movie version. I still can't speak specifically about the books, but at least I can finally say, with specifics, why Twilight: the Movie sucks.

I have to start by backing up to the main premise – vampires. Vampires are, or would be if they existed, abhorrent monsters that exist in defiance of the sanctity of life. They are not sympathetic superheroes. Twilight keeps trying to make us think of them like that. Spider-Man is alluded to and their super-climbing certainly looks a lot like Spider-Man and their strength and reflex levels seem to be on par with Spider-Man's and even Edward's mind-reading skill serves him a lot like Spider-Man's spider-sense. Makes me wonder if Stephanie Meyer is just a big Spider-Man fan. But no, she insists her characters are vampires. But are they?

Twilight's vampires drink blood and they avoid sunlight and they come back to life after they die, but vampires do not sparkle in sunlight and they do not reflect in mirrors. Yet Twilight makes such a huge deal out of these exceptions (the climax conveniently taking place around a lot of mirrors). So Twilight's vampires don't pass the duck test – if it walks like a duck, quacks like a duck, and acts like a duck, it's a duck – these vampires simply fail too many criteria to be vampires. They could just as easily be blood-drinking aliens as vampires. Oddly, our main character Bella never considers this at all. She just accepts right away that they are vampires. Why? Because Edward the Pasty/Homely/Inexplicable Heartthrob Vampire says so.

And no one questions Edward. Ever. When Edward says James, the evil vampire, will never give up trying to kill Bella, we only have Edward's word on this because he's the only mind reader. But we also know that Edward is jealously over-protective of Bella (and a psycho stalker to boot, sneaking into her room at night to spy on her, though Bella inexplicably doesn't mind this invasion of her privacy). Couldn't at least someone have said, “You know, Eddie, maybe you misread his intentions in the heat of the moment. Could you at least double-check before we all gang up on him to kill him?” But no, Edward says James has to die, so everyone jumps into action to do what Edward says.

And there are so many things Bella should be questioning. Does she really love Edward? She thinks she does because she feels drawn to his staring and she thinks she dreams about him at night. Yet while he's staring, he's trying to probe her mind and she is probably somehow feeling that mind-probe as a pleasurable experience. And she soon finds out that she's not dreaming about him, she's really waking up and seeing her in her room, but – again – this doesn't phase her in the least because Edward says he's just watching her sleep. If she caught him sniffing her panties would she bat an eye?

Does Edward really love her? He even tells her that he's drawn to her physically, like a pheromone attraction. What woman wouldn't be insulted when he doesn't mention respecting her mind too? And can we even trust that Edward inexplicably can't read her mind when he can read everyone else's? Like so much else about Edward, we only have his word on it.

We are told that James is an amazing tracker thanks to his heightened senses. If his sense of smell is so great that he can track Bella cross-country, then how on Earth does it take him about five minutes before he notices she smells like a human at a range of about 30 feet? And why does she believe Edward when he says James won't hurt her father, but then she worries that James will hurt her mother? Because Edward didn't say she would be all right?

I think Edward isn't just a mind-reader – he's a mind-controller. He's pulling everyone's strings and engineering all these dangers for Bella just so he can conveniently rescue her. He made up the thing about James wanting to kill Bella and then contacted James and asked him to play along. Edward conveniently shows up to save Bella from James before any of the other vampires. We're supposed to believe it's because he's faster, but what if it's because he already knew where they were because he had arranged the whole thing?

I was also annoyed because the father-daughter relationship subplot is never really resolved, but mainly because of my huge unanswered questions and the giant plot holes they illuminate, I gave the movie a D for a grade. Now, the movie could have upgraded to a B if the dad had been the hero. Gathering clues about the Cullens, Dad would figure everything out – including seeing the obvious holes in Edward's stories to Bella. Just as Edward was performing his fake-rescue of Bella and using James as his fall guy, Dad would show up, confront Edward with the truth, and stake the jerk through the heart. Then Bella would see that she should never have hid things from her dad, would respect him more than ever, and their healed relationship would be our happy ending.

Now, Megan was initially pretty disappointed in me for not liking her movie, but the next day she agreed that her appreciation of the movie really comes from having read the books and being able to fill in the gaps that the movie leaves. And maybe the books really do answer my questions better than the movie does. Not that I really need to know. Twilight is a primal fantasy for girls – the need girls have to feel that she will not only find someone who loves her, but that he will be special in a secret way. Megan was fascinated by that first in Lois Lane’s Superman and then in Gwen Stacy’s Spider-Man. My biggest problem with Twilight is that it’s been done so much better.
Posted by Scott at 3:34 PM 4 comments:

[From the same page as the last one.] 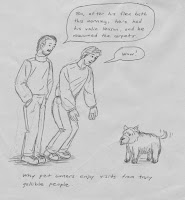 [Circa 1998, I was briefly obsessed with the cartoon The Far Side. On my breaks at work, I sketched some one panel cartoons. Here's a sample.] 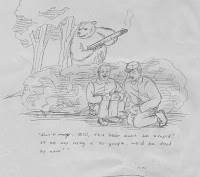