I'm currently finishing up some artwork for the second Major Magus story in the next issue of The Trophy Case (see here for more issues!).  When you read the Major Magus stories, you should be able to guess which Golden Age superhero he emulates, but it's even more obvious in this initial sketch for the character.  Thank goodness I cut back on the number of buttons on his coat since then!
I've made his long coat longer, so that it hangs more like a cape behind him and, of course, now he has a moustache (with that moustache and brown widow's peak, the last time I drew him he reminded me of Dabney Coleman!). 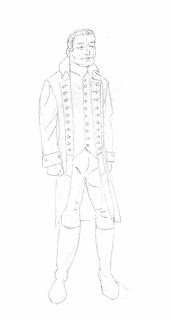 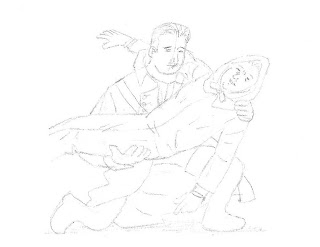 This second sketch is a "deleted scene" from the latest story.  Major Magus is gently scooping up a paralyzed old woman (it still happens in the story, but I decided to go without the drawing).