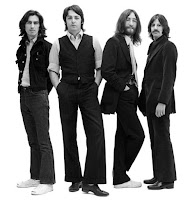 A while back, I was thinking of the tribute band American English's great CD 1971 and wondering if they didn't go forward too far.

The Beatles' last LP was released in May 1970, not long after the band officially broke up, but by the end of 1970 the individual members had plenty of material between them to have put out a second album together, had they wanted to. And let's face it, McCartney and Plastic Ono Band were shallow albums from artists who were maybe not quite ready to go it alone yet.

So what if things had turned out differently? What if Paul and John had swallowed their egos and given George more space on the next album -- which they could have done and still George could have produced a two-disc All Things Must Pass! Further, when slick lawyer Allen Klein came between the Beatles, had he been exposed sooner as a hack to John, George, and Ringo sooner, they might have realized that Paul had their best interests at heart when he lawyered up independently from them. And best of all, if John had just put more professional distance between the band and Yoko Ono, there would not have been that tension between them. In such a more pleasant work environment, the Beatles might have felt like producing even more albums together!

So what would the last 1970 album be called? They had already done The Beatles, but by 1970 they weren't feeling like The Beatles anymore. All splintered in different directions, the Beatles might have decided to embrace this by naming their next album John, Paul, George, and Ringo.

The first side would lead off with "Power to the People" -- a nice, upbeat anthem from John. Then they'd switch things up with Paul's "Every Night," followed by George's "My Sweet Lord."  Paul's little songs from McCartney would instead serve as bridges between bigger songs on this album, so next up would be Paul's "That Would Be Something," leading into John's "Love." Then we'd get a medley of Paul's "Junk" combined with "Teddy Boy" -- two songs with lots of potential that never really made it on their own. Then side one would come capped up with another great George song, "Isn't It a Pity."

Side B would lead off with Paul's best song, "Maybe I'm Amazed," followed by John's "Hold On." Then The Beatles would stun their fans with not another, but three more George songs in a row -- "What Is Life," "Let It Down," and -- because it's too good to pass up -- "All Things Must Pass." Lastly, Ringo would get to pursue some of his growing nostalgia with a closing cover of "Night and Day."
Posted by Scott at 10:25 PM No comments: