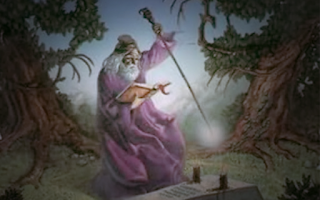 In Sittingbourne, Haruspex Niv paid for all but the ship’s crew to sleep the night in the Red Lion Hostel.

The next morning, Niv, his hireling Peter, Siliceous Slagg, Jake, Sagan the Nameless, and John Grond returned to the Rhenee Mistress and continued their riverboat tour southward, reaching the Village of Faversham that same morning. The wagon and horses were unloaded, the horses given some time to stretch, and the party considered their best course of action. Though John wanted to seek out information at Pelor’s Inn, Sagan suggested any guards at the west gate to the village (Faversham being a walled village, even if the wall was not very high) would be a better source of information. The two sentries were very surprised to see anyone wishing to go to Ashford; no one had been coming or going to Ashford for some time, since a hydra was lose in the area (something the party had heard rumors about weeks earlier). The party decided to chance it, but bought a pair of goats to bring along as hydra food in case they ran into it.

Outside the village was an abbey. Jake had always wanted to visit this abbey and begged leave of the others to see it.

Jake-less, they survived the day, seeing no sign of a hydra. But neither did they reach Ashford that day, given their late start. They camped the night behind a low hill away from the road and set one-man watches. It was at the end of Niv’s first watch that a small band of local adventurers from Ashford happened upon them. They were hunting a barrow wight, traveling with goblins, that had been sighted in the area. They knew of Propsero -- indeed, they knew he had been shut him in his home for over a week, refusing to leave, even to help with this wight business. This lent extra weight to their mission of helping to move Prospero, the task the Striped Mage had given them. Further, the adventurers were concerned the party might be wights in disguise. John submitted to tests to prove he was no wight, and the local adventurers pushed on.

In the morning, they reached Ashford and John checked the local stores for silver weapons, but found none. They set out to find Prospero’s house, got lost in the forest, but doubled back and found it a few hours later. And that was when they encountered eight little grey men -- kobolds -- who warned them they had no business with the wizard and to leave. It seemed like it would be a simple matter to put them to sleep with a spell -- but they seemed unusually resistant to the spell and only four went down. The other four were defeated, with two taken prisoner, but not before John, Niv, and Peter had all been injured, Niv and Peter seriously.

They were searching the bodies and finding some silver pieces when nine more kobolds arrived from the woods with the same warning. John killed one of the prisoners to try and break the morale of the fresh wave, but it did not work. Another sleep spell was attempted, this time by Sagan, but he was hit with a spear and his spell disrupted. Niv, Sagan, and Peter all retreated to the house with the remaining kobold prisoner while Slagg and Grond tried to hold off all their opponents. Indeed, they won in the end, dropping seven more kobolds and the two remaining ones fled, but by now both Slagg and Grond were seriously injured as well.

Meanwhile, the others were exploring the ridiculous-looking house, filled with curious knickknacks, and clocks that were impossibly miniaturized. Most importantly, Peter found Prospero sitting in his living room. Prospero was confused and indecisive, but claimed this was because of some unknown spell afflicting him. He was further aware that his house was surrounded by monsters that were not just unusually magic resistant, but “impossibly” magic resistant. To test this, Niv and Sagan both cast their remaining spells on the prisoner, trying to make the kobold like them, but it did not even seem to need to try and resist the spells.

Slagg came in, announced the battle was over, and asked for a healing potion. Luckily, Prospero had one with extra-healing properties, so Slagg and Grond could split it between them. It didn’t heal very much, though.

They saw another test shortly of this “magic resistance” when they convinced Prospero to come outside and they saw a large green monster about to attack Grond. Prospero dropped a Cloudkill spell on it, but the spell didn’t do much but obscure its vision. Everyone fled back inside.

While packing Prospero’s valuables, John stole a “magic coffeepot,” and Sagan found a magic talking mirror on the upstairs floor. The mirror told them of a secret passage under the house that Prospero claimed to have forgotten. It was a tunnel that led six miles east; the magic mirror was even able to show them that the end of the tunnel was clear. So they all made their escape, leaving their horses, wagon, and goats behind for the huge green monster…
Prospero recovered his wits as soon as they were some distance down the tunnel. Once they were out, Prospero took his things (minus the pilfered coffee pot) and teleported to the City of Greyhawk. Before he went, he asked them to make contact with his friend, Roger Bacon, in the Village of Faversham. They needed to go back there anyway to pick up Jake from the abbey.

Peter, Niv’s hireling, was badly shaken by having to flee from a troll -- he just kept going, never to be seen again (so far).

After a week in Faversham, during which time Prospero never returned, Sagan and John decided it was time to return to the Striped Mage and inform him of their success. They had, after all, helped Prospero move, just not in the way they had expected. Upon returning to Greyhawk City, though, they were shocked to learn that the Striped Mage had died, apparently from old age! All of his indentured servants were expected to attend his wake that weekend…but some of them would soon have other plans…

On a beautiful autumn Starday morning, seven adventurers rode out from Greyhawk City, northward toward the Cairn Hills. The rented carriages carried them over the side trail that led to the infamous ruins of Castle Greyhawk. For Haruspex Niv, Siliceous Slagg, and Jake, it was a return. For Sagan the Nameless, John Grond, Tuko "Lumpy" Burrstone, and Jolith Rhygar, long denied the chance to seek fame and fortune by their master, the Striped Mage, the day of his wake was a fittingly spiteful time to at last visit the Castle.

Not long after one of the carriage drivers had told them about an ogre ambush on the last carriage tour to the old castle, two ogres charged the party just as they were unloading from the carriages. First blood went to Jolith’s sling, but the ogres responded in kind with hurled spears and one random throw impaled Sagan and the other impaled one of the carriage drivers. Jake tried to magically heal Sagan, but it wasn’t enough -- Sagan the Nameless died. The battle was quickly ended, for the injured ogre fell afflicted by Niv’s charm spell and, between the charmed ogre and John (who could speak Ogrish), they convinced the remaining ogre to stand down.

After huddling up, the adventurers came up with a pretty audacious plan to deal with the ogres. They bribed the ogres into compliance by feeding them the horses from one of the carriages, then bribed the remaining carriage driver into returning to the city, not report what happened to the other carriage, and use the money left on Sagan to pay for his funeral. A few choice gear items were removed from Sagan (and carried by John). After the carriage was away and the ogres were done eating, the adventurers asked for an escorted tour of the castle grounds.

The ogres showed the adventurers their home and inside was a human cleric chained to the wall -- what the ogres offered to share as dessert. The adventurers sent the charmed ogre off on a false errand, surrounded the remaining ogre, and killed it. They freed the cleric, Brother Langdon, who had come on a solo pilgrimage to the Shrine of Boccob here at the castle. They found Langdon’s gear (and 30 gold from the ogre besides), and brought him along to keep him safe. Then they retrieved their charmed ogre and convinced him to go into the dungeon with them, through the trapdoor entrance they knew so well.

The ogre did not care for the tight confines of the dungeon and had never been down here before, but proved an invaluable door opener. The jail cells in the entry hall were empty this time, so they were able to move on quickly. The old brigand lair was now being shared with hobgoblins (they had 15 gp between them), but with the ogre’s help the hobgoblins were quickly dispatched (though Lumpy was seriously hurt by their polearms) and the brigands surrendered (they had a decorative shield worth 20 gp). The old orc lair was empty. They searched the sarcophagus room and found treasure they had missed months earlier (a 100 gp tourmaline and a 25 gp incense burner). Lastly, they found a new room with a trapped chest in it (Jolith triggered the trap, which was supposed to hit him with magical cold, but something went wrong with the trap and he took no harm). Inside was the biggest cache of treasure they had ever seen before -- 4,000 gold pieces worth of gold and jewels, and three magic potions.

Leaving the castle with their spoils, their charmed ogre pulled the carriage halfway back to the city, where they left the ogre to his own devices, and then they walked back home the rest of the way.
Posted by Scott at 11:11 PM