The adventurers (still having no company name, even unofficially) have found the cost of carriage rides to Castle Greyhawk is prohibitively expensive since the last carriage driver died/”went missing,” so they bought two mules, put the dwarves on the mules along with some of their gear, and everyone bringing platemail armor for the dungeon bought leather armor for traveling, so they could make the best time possible.

At this time of the year, even moving as fast as they could, it was dark well before they reached the castle, which was also when they came across a small campsite of goblins. The adventurers used bows and slings to attack the four goblins, downing two, but the other two fled and got away. The goblins were poor, with only 6 sp recovered. 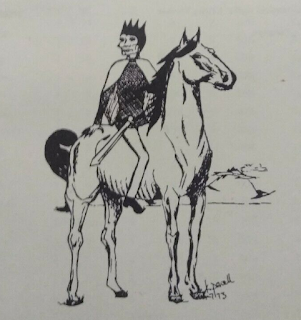 When they did reach the castle, it was well after the goblins had, and they had gone for help. Six orcs piled out of a gatehouse before the castle (one that had never produced occupants before) and charged the adventurers with their bardiches, with the goblins trailing behind. But the party was now well-experienced with missile fire and brought down half the orcs before they’d finished their charge, and took down the remaining half right after, without a drop of the party’s blood being spilled. The goblins tried to get away again, but the party’s slings were too deadly efficient. Unlike the goblins, the orcs were apparently well-paid by someone to guard that gatehouse; they had 21 gp between them.

The party made their way into the courtyard but, because of the late hour, decided to rest for the night before visiting the dungeons. They knew, thanks to Brother Langdon, that the Chapel to Boccob was a safe place for them, and they hoped it was unoccupied so they could get away with bringing their mules in. Unfortunately, a Brother John was at the chapel, a priest who had risked entry to the castle because he felt he was needed here, but apparently not to put himself at risk helping to clear out his monstrous neighbors.

Instead, the party decided it was a safe risk to put the mules in the old stable overnight. John confirmed that it was no longer haunted since Denebus the Wraith (Siliceous had researched the likeliest identity of the wraith on his downtime) was dispatched. To further ensure their safety, the main doors to the stable was barred from inside and the party left through a side door, and posted a watch all night from a window in the chapel.

That last step is what ensured that Siliceous, during his watch, was able to hear the main doors being broken into.

A lone ogre had been roused from whatever ogres do in the night by the smell of mules, and seriously injured one of them with his axe before John Grond was able to distract it with his ability to speak Ogrish. Grond came up with a plan, that even the lawful members of the party wound up endorsing, of paying the ogre to guard the mules through the night, and then kill him in the morning.

To be fair, they tried charming it first, but the spell failed. The plan to kill it surprised the ogre and it was dispatched quickly before it could retaliate. It had only 14 gp on it.

Now it seemed clear that there were just too many ogres about and that it was dangerous to go into the dungeon with ogres at their backs. So the new plan was to go around to all the towers along the castle’s curtain wall and search them for ogres. They started by knocking on the door of the square tower at the castle’s entrance they had previously fought ogres in, and found two new ogres had made it their home! Haruspex put one to sleep with his remaining spell. It took two minutes to drop this ogre, and during that fight it delivered a crushing blow to John Grond! After the battle, Jolith and his hench-elf carried Grond back to the chapel to be healed, while the others searched the tower.  The tower produced a total of only 77 more gp in the ogres’ sacks.

Back at the chapel, Jolith had to bribe Brother John to help save Grond (since Jake the Cleric had not come on this trip, they lacked a healer!). For 20 gp, and as a favor to Langdon, Brother John helped – though through mundane rather than magical means. It was touch and go, but Grond lived!

Ready’reat 13, 620 CY. An unusually warm earthday this late in autumn.

Jake is still busy with other things in the city (this has kept his new inductee to the party, Erin, from being able to go with yet), and Lumpy is still mysteriously missing, so a party of five -- Haruspex Niv, Siliceous Slagg, John Grond, Jolith Rhygar, and Brother Langdon -- plus their two hirelings (Slagg’s silent caddy, Haldor, and Jolith’s prankish elven archer Trebor) and their two mules (the injured one has healed nicely) make their way back to Castle Greyhawk. The plan is to spend the night in the Chapel of Boccob and then visit the dungeons again.

Those plans are changed abruptly when they find the drawbridge to the castle is up!

Siliceous has done much studying of castles and knows there must be a sally port or two somewhere, but they prove difficult to spot from the far side of the chasm-like dry moat completely surrounding the castle. Undeterred, they circle the moat for the first time and discover, on the east side, a narrow set of stairs descending to the moat’s floor 40’ below! Everyone (mules included) go down and the first thing they find is a cave mouth, but in the east wall of the moat, leading away from the castle dungeons. Still, the party is confident that the tunnel inside might loop down and around and come into the dungeons, so they go in.

Almost immediately they are stopped by a pit at an intersection of tunnels. Grond carefully tests the wooden planks over the pit and finds them all rotted and unsafe. So the party leaves the mules here, guarded by Haldor and Trebor, and the five of them rope themselves together so they can cross the narrow corner around the pit safely and head south.

The route never does lead under the castle, but only further from the castle! They explore cave after cave, finding a locked salting room, a cavern that might have once been an ogre nesting site before the ogres moved into the castle, and someone’s abandoned archery room (a long straight tunnel leads into it) now inhabited by four kobolds. Along the way, they pick up some loose treasure here and there, the best being a bolt of velvet found intact in the old ogre den.

While listening in the archery room, Siliceous hears someone’s footsteps in there with them that he can’t see. He takes his rope out and swings it around until it touches something invisible. Then that invisible person runs north down a tunnel leading out of the room, but Langdon sprints after him and catches him. The invisible person casts a charm spell on Langdon, but he resists. Everyone can now see he’s some dressed like a fellow adventurer. Siliceous and John join Langdon in a dog pile on the lone spellcaster, beating him up until he surrenders. Haruspex tries to charm him, but this man -- who says he’s a conjurer named Arlo -- also resists the spell.

Arlo claims that he was also looking for another entrance to the castle, so he could impress its new master, Eneever Zig, by getting in. In exchange for his life, Arlo tries to buy his freedom with the contents of his purse, that includes three precious stones, and the rumor that an old well on the south side of the castle leads down into the dungeons. Arlo is tied up and held by Langdon on a leash as the party moves on to explore more (the room behind the door turned out to be abandoned).

Moving further east, in the direction that Arlo was fleeing, they are surprised by goblin guards and, despite there only being three goblins, they prove surprisingly successful at seriously injuring both Grond and Langdon before they go down. The party moves on again, but more cautiously.

To the north is a large cavern. As they are checking it out, they hear a huge crowd charging at them from the north end of the cavern. It turns out to be 10 more goblins (it sounded like even more!). Luckily, Haruspex has been holding onto his sleep spell all this time! It drops eight of them, and the remaining two turn in mid-charge and flee through another passage east. Fearful of reinforcements, the party decides they have had enough of this foray and backtrack out the way they came. Haldor, Trebor, and the mules are still alive and well when they return to the entrance!

Before leaving, the party checks out Arlo’s story and do indeed find an old well outside the castle walls. They lower a lit lantern on 100’ of rope to test its depths, and they have still hit neither the bottom or water. Realizing they want no part of this particular sally port, yet, they head home to lick their wounds and sell their loot.